The tree surgeon was here the other day cutting down a few trees near the house, as well as a large overgrown conifer – where he found a pigeons nest. So he moved it very carefully to  another large bush in garden. Unfortunately not as high as last home. Anyhow once the hedge was cut down, & the disturbing noise had abated in the garden, we worried would the ‘mummy pigeon’ find her fledglings nest. ( proper name for baby pigeon I’ve been told by my husband is squab). 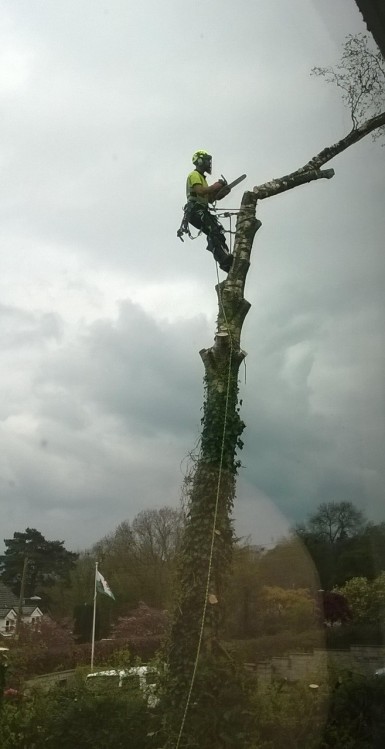 Later that day Julian & I looked at the nest & the chicks looked perky enough.( sorry the picture not very focused!)

The pigeon seemed to spend about a day locating the nest – she kept flying so close then would swoop in wrong direction, but eventually found them. so all was looking good.

Then today Julian found the squabs on the lawn. Obviously something like a magpie or other predator had found them. So it has been rather a sad tale. We had become rather attached to them – & was up until then a good story.  However Julian says the pigeon will hopefully have another clutch before the year is out-  a small bonus.

There has been rather a break in my blog, but Josh has been here for his Easter hols, & its been busy busy, busy.

One of his last remarks on Sat pm whilst making tea, was ‘ I’ve got a squirrel in my mouth’. Before I get chance to ask ‘what was that you said Josh’. He says ‘ but a stone in my heart’.

I think there is a song title in that somewhere.