It’s lovely when Christmas is hear, all the decorations, food, fuss, Xmas wrapping, and unwrapping, but peaceful when its over.

I was lucky that on the last day the doctors surgery was open before Xmas time-  Friday  22 Dec I was pretty convinced I had another UTI, so took a sample to be checked. At lunch they rang to confirm this. So luckily I started strong antibiotics on that day. Some people may say, how miserable this news of another UTI may have been. However if I hadn’t got the symptoms that am or actually the previous pm, then it could have meant trip to hospitals or perhaps problems with my balance again. So I think it was very very fortuitous.

For 4 days I felt crap, even with all the Christmas cheer no alcohol passed my lips, I was feeling weary, uncomfortable, & not the best humour with both boys at home; everything was a struggle ( especially with dealing with Josh ( autism),who still wanted his lunch at 12 noon, tea at 5pm- no matter how I felt).

Thankfully Julian was on hand to help out, and he always takes the shaving/washing/showering chores, And I help prepare food/clean his teeth.  Not helping  really but assisting so as not to break his routine with independent living skills. Events usually are fixed to the same time each day always at the same time each day  washing  7.50 pm. teeth 8 pm. Then he will want to sit with me and do games on his tablet around 9.25 pm. So my evenings are different with Josh in the house. And after his midday lunch he is keen to have karaoke around 1.00 pm. I seem to be constantly looking at my watch when Josh is staying with us. If I offer a cuppa of tea at 10 am he will study his watch & say “maybe later as 10 am it’s time for a lolly!”

Luckily by Christmas day I felt slightly more human again. Hurrah. Time to enjoy watching  the boys opening the parcels in their stockings. They may be in their mid twenties but it still is exciting watching them open their gifts. Then later having eaten our slightly over cooked turkey, opening gifts from under the tree. This year Julian passed this duty onto Harvey, so he could sit comfortably on a sofa, rather then perched on a tiny milking stool. And a fine job Harvey made of it to. Studying each label and trying to hand out gifts to each of us in turn.

We all had a good laugh, when Julian was showing everyone this tea towel, I’d bought on our holiday last year in Menai Bridge.  (Not that tea towels are something I usually buy as presents, but it was a nice design of the bridge Julian & Josh tried fishing under I knew would make us think fondly of the last summers trip. Just something to unwrap really when I was panicking Julian hadn’t many presents! 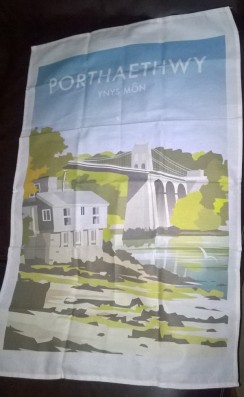 Julian was showing the picture, & letting Josh guess, we all said it’s somewhere you’ve been. Somewhere you stayed on holiday. And he said’ Oh yes, I know its Northampton”.

We did laugh- we have never been to Northampton on holiday & Josh certainly hasn’t set foot in the County! 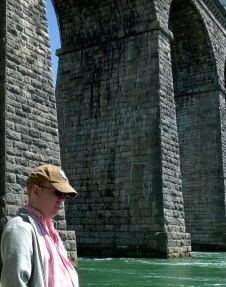 This year it was mellow  Christmas day. The cooking was slightly too relaxed ( hence over cooking the turkey ; not concentrating on cooking times from the ‘Delia’s Christmas cookbook’! But it was relaxed in the kitchen, the day went without a major event unlike 2 years ago when I had to call out an ambulance with mum blacking out before the Christmas pudding.Or like last year when I was back & forwards visiting mum in hospital, with the terms, Sepsis, Delirium and other worrying terms.  This year it was uncomplicated, relaxed. Grandma Shirley ate with us making a small party of five.

I hadn’t been up to the mark and left setting the table until Xmas morning. So in fact gave Josh this chore, and he loved it- preparing for the turkey meal, is one step closer to present time. He got the cutlery ( it was placed on the table near where we ate if not exactly in the right place), he got out crackers, the best cut glass wine glasses, folded paper serviettes into a shape, not perhaps the right shape, but who cares. We weren’t expecting ‘swans’. he did a fine job, and was proud of the task.

I placed ‘lazy Susan’  in the centre of the table, something Dad made a couple of years back for Christmas present’s for all his children. (a turntable (rotating tray) placed on a table to aid in distributing food).

I seemed very relaxed- not wanting to dress up for the day, but we did use our best china.  All in all it was better than expected. We raised a glass at around 3 pm to absent friends ( I meant family). I knew who I was thinking of, and my brother Ian had been earlier to the grave to wish mum & dad happy Christmas 😦

Josh’s favorite present was a small ‘Mr Bean teddy’. He was so made up with it. That and a pair of father Christmas socks! I can’t name the things he really preferred like Xbox games, or DVD’s- as they are not interesting to me really- and I suppose he gets more entertainment from all those but for the sake of Xmas spirit the socks looked the part.

And so it has passed as not a remarkable Yuletide, but slow paced, quiet, family time. It was lovely to have the family under one roof.

When Julian & Josh put up the Xmas tree during my malaise, Josh had great fun, placing the decorations on the tree, the  different colored baubles, the angel Harvey made at primary school ‘Rhos St’, a few old tatty decorations that turn up year after year, but we saved the ‘drum’ for Harvey to hang on the tree when he arrived home on Xmas Eve night.

I have probably mentioned this before but when they were little, Josh had the bugle, Harvey the drum decorations and so it is fitting they hang them up themselves.

Things went moderately well until our TV’s stopped working on 30th Dec. We rang an ariel man, who amazingly came & fitted a new TV ariel that day, so we were back in action and I could continue to watch the feud between Betty Davies & Joan Crawford on Sat pm. What a great series based on ‘ What ever happened to Baby Jane’. I do love a Betty Davies film.

Within hours of having the new ariel fitted our water went off. So for 24 hours we were without water- but it was all systems go by New years eve.