Remember I mentioned earlier in the year we bought this car- in Anglesey- from the garage based in a village with that long name. 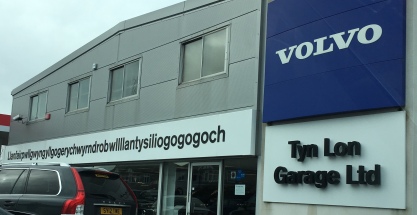 Well the MOT is due in September & it gave me an excuse to start thinking about perhaps stretching the drive to Anglesey for the MOT, into a days trip maybe with picnic or suchlike; into over night stay;  perhaps weekend away; until I had secured a weeks stay in a cottage near Red Wharf Bay.

And this then moved onto next years holiday with Josh. Having viewed a lot of properties whilst finding the above- it was a great relief to book somewhere for next summer- or before kids break up ( with Josh’s anxiety near small children). Plus cheaper rate! This is a job I normally take on after Xmas, after best properties already been booked. So although a long time away until we go- it is a relief to think I won’t have to spend hours, days, weeks locating a place. And it has a Hot Tub- so Josh will love it! lets just hope for weather like this year. 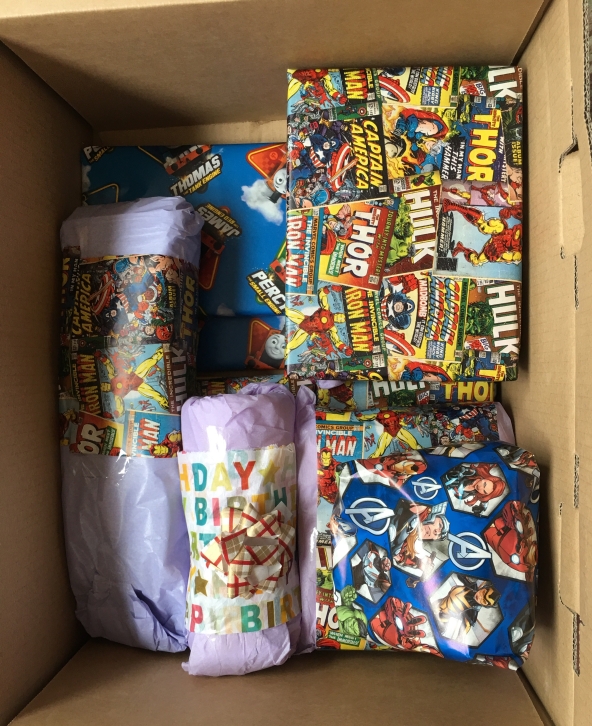 Wednesday we collect Josh to come here for a while to spend time leading up to his birthday. He has a brilliant memory ( unlike his mother) and although having only 2 children you would think I knew how old they were ( don’t worry I do really)- but it was just a shock when Josh announced he would be 30 next year.

Oh my God. How has he managed to reach this tender age- well it will be 29 next week – so quickly. Ridiculous. And I am still wrapping his presents in Thomas the tank paper. However that is what he likes. Not so keen probably on the lilac tissue paper! Julian was not impressed when I showed this mixed inside the box of presents- so I’ve disguised it will a bit of Ironman .

But if you have ever watched Josh open presents- he doesn’t make much comment on the wrapping, but what is inside! Most are DVD’s or books, socks,- but there you go I can’t really remember what is inside!!

My battery is on low ( hypothetically speaking) my energy level ( MS fatigue)- which is my fault- I’ve done to much this morning. Got my knickers in a twist when I turned radio on and heard the end of Radio 2 Vanessa Feltz show, where she was talking about the introduction of Blue badges could be extending for those with autism and dementia. NOT WHAT I WAS ANNOYED ABOUT -See BBC News item below. https://www.bbc.co.uk/news/uk-42763767.

And in itself this is a good proposal. To be used with discretion perhaps. Parking in other vacant spots if available- like I do. But what got my goat- was they kept referring to ‘autism’ as a ‘mental health condition’.

Which it isn’t. See National Autistic  Societies ‘ What is Autism’.

However, perhaps those suffering with ASD are also sometimes likely to also suffer from mental health problems. But that isn’t the same. One HAS THE POSSIBILITY OF BEING cured. So that wound me up this morning.

And then spent more time/energy trying to understand these new Facebook changes around privacy etc. I can’t even remember what they are changing- just read they are making changes. Decided to reread another day when feeling more up to such matters. 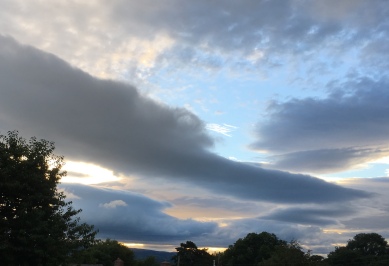 Yesterday I had trouble getting out of the bath. Do you want to know this…………….. It’s my silly knee that has the fluid on it. Normally have a shower & this  inability to get up- caught me by surprise. So first thing today before my battery started depleting I was positive and made an appointment to see a physio- to try & do some strengthening exercises. Perhaps the little Pilates I manage is doing more harm then good. So will be useful to be pointed in right direction. It is just no good not being able to push myself up from in the bath- for heaven sakes!!!!

On the positive note my injuries from fall in South Wales are nearly all gone. Face doesn’t look like a busted boot anymore although some people e would disagree!