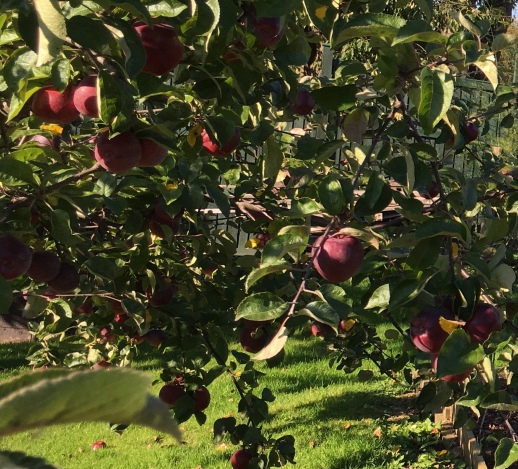 Just over an year ago I ordered a storage cupboard for outside for amongst other things to store my apples. We have one great eating apple tree and two cooking apple trees. I wade through the eating apples( as the only one in the family (although there is only Julian & I here now) who cares for an apple).They are a great flavour. In the past I would take a bag full of apples to mum, as dad. They always had an apple for their desert. Dad cutting his up to small wedges and eating with a touch of salt.

Each year we’d pick the apples. In the past Harvey would climb to the tops of a tree and help us pick them. Or Josh (Normally begrudgingly would spend an hour outside joining in the  fun- as I would a call it- josh preferring to sit in front of Thunderbirds).

The apples once picked are then always laid in the fruit boxes my grandpa made. 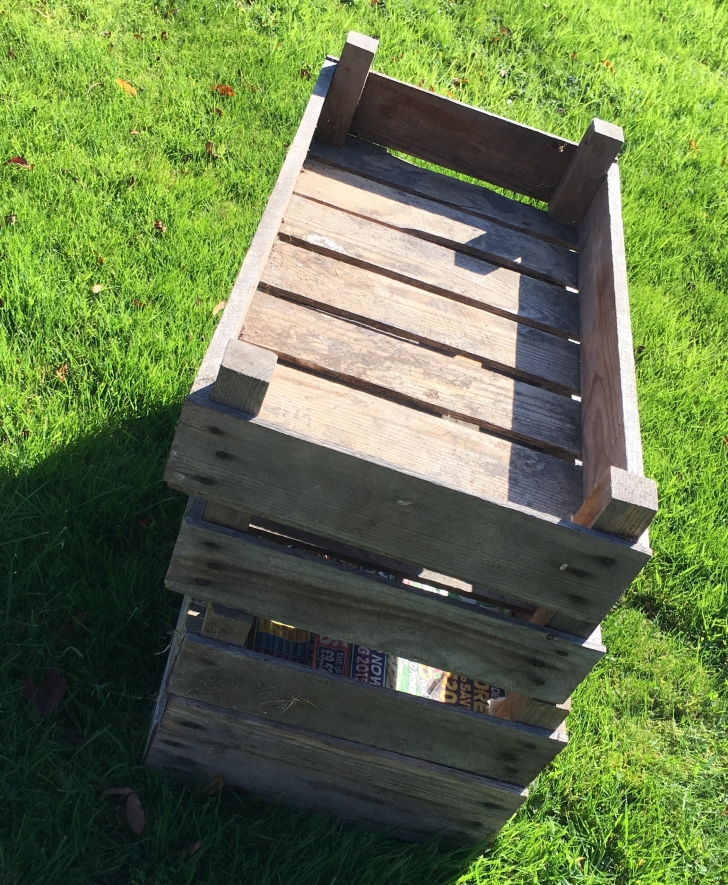 And over the next few months I would eat the eating apples. It was finding somewhere to store them that was the problem. Last year ( as my storage cupboard hadn’t been made) the apple trays went in the greenhouse. Free from vermin- but my goodness the apples would nearly cook in there some days it was so hot!. The space outside the garage was another possible storage place as it was dry, but either blackbirds or mice would help them selves and large chunks appeared. Not very appetising.

So after nearly twenty years of living here, I was fed up waiting until we decided on which unit, how big etc etc, so just got on my computer and ordered this storage unit from Amazon. 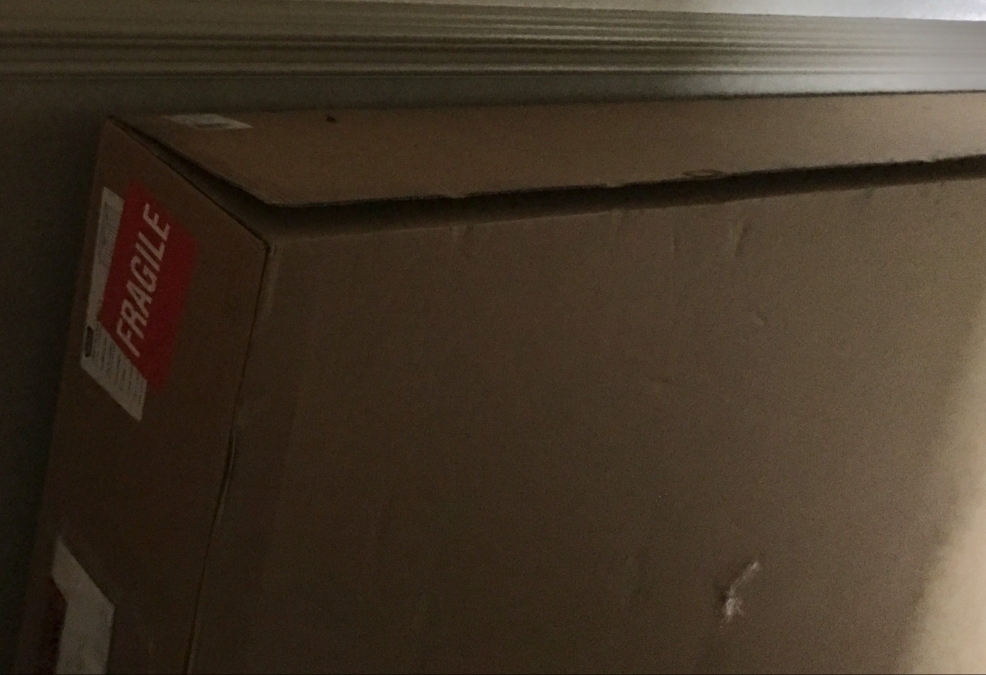 Very easy. When it appeared it was a LARGE BOX  and when I say large it was about 4 x 6 x 1 foot. We lived with it for about in our hall for over 8 months. We looked at the instructions and it mentioned ‘ a two man job’- so Julian thought Harvey would be better assistant then myself. So Christmas was mapped out to build the box. But the weather was so cold, and as you would need a large area it has to be made outside no way could you go out in the frost, rain and snow.

Then Harvey dropped the news on us about spending 3 years in Australia- but  he had quite a while before he went. So I was positive this box would disappear from our hall.

February 2018 arrived and it was chaotic- piles of clothes all over the hall way, boxes of books, suitcases for the shipping, suitcases for Singapore, suitcases for Sydney; shoes needing scrubbing with special liquid on their souls and lining up in lines . No way was there even time to look at the instructions to build a stupid box to stores my apples.

And so we waved bye bye to Harvey. And the year moved on. We decided to drag this box into his bedroom. Oh that made the hall look bigger. And somehow just forget about the apple box. Then I saw how the apples were getting ready to pick and starting nagging about building it, until Julian said yes. After all it had been here for over a year!

It was a hot day on Wednesday ‘mini Indian summer’. I was the assistant. All I did was help hold the first piece, hold the instructions to read, and after that sat down on a nearby bench- sorting all the small pieces;  passing screws, other shaped pieces as and when required. 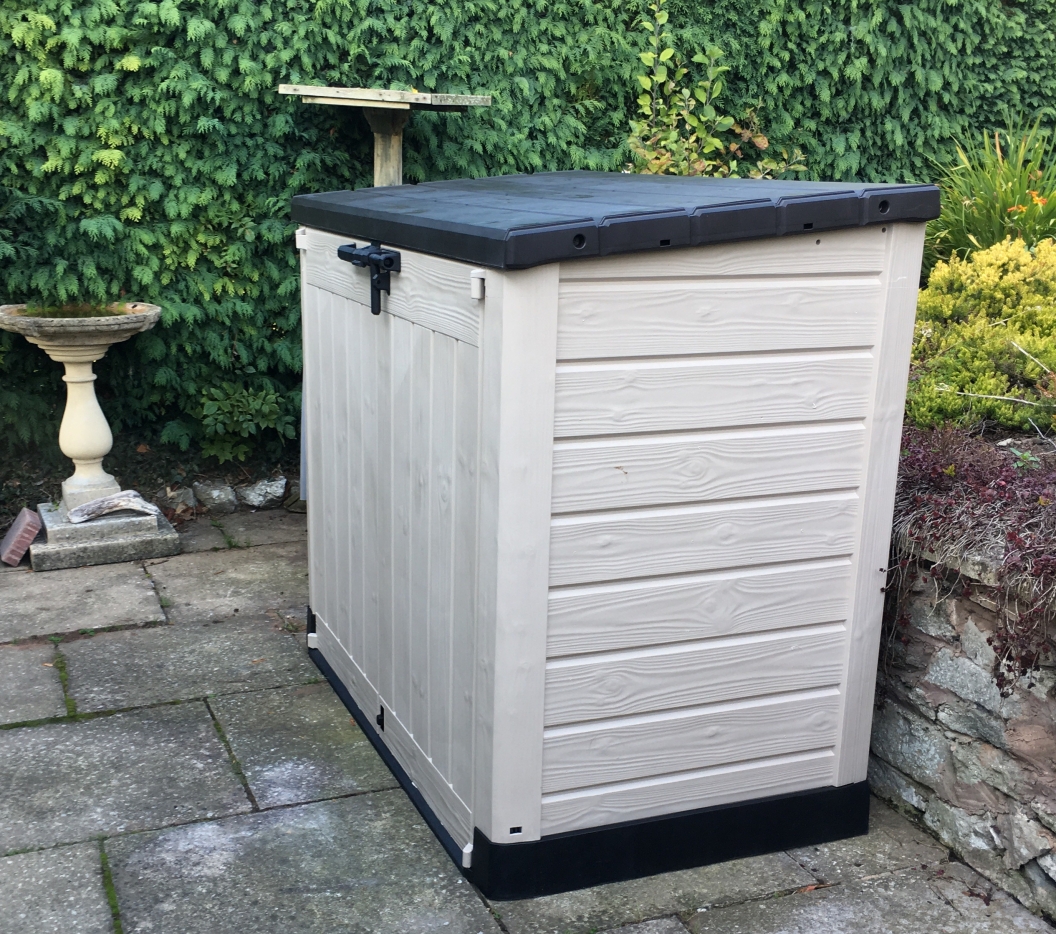 And so it was constructed. We picked apples in the afternoon as the weather so good.  Wonderful day.

Afterwards I staggered in the house- my legs killing me. Julian carried all the trays full of apples and in the box they went. Sweet as hopefully the Pie I will make( actually it may be an apple crumble) never will be a pie – hopeless at pastry. 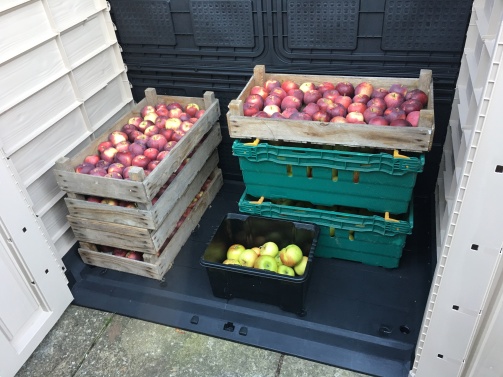 Ever since Wednesday it has rained. It has blown- what I would decide as a gale. So any apples that we couldn’t reach are now on the floor. Brilliant timing. 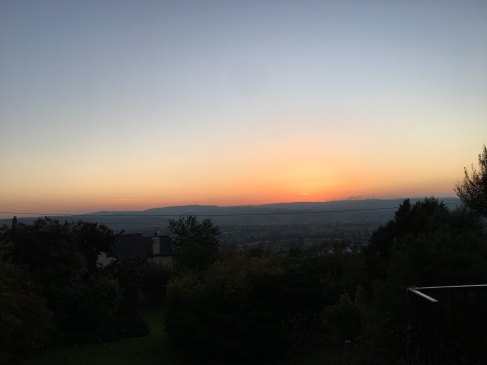