I have had a change of email & what a hassle. All those places you have to update. Writing lists and ticking them off in a red biro when completed.

Yesterday I spent all afternoon trying to change it with Apple. I never realised how it has overtaken our lives. Even down to music on Josh’s ipod.

In the end after talking with helpful chap over at the Apple helpline- I gave up!!!

But so many hours wasted!

Anyway I have made progress today. Will leave those difficult places yet to change until Harvey is here at Xmas.

Why am I telling you all this- only as an excuse for not updating my blog.

Josh was here for a few days over Halloween- and was lovely to catch up. I think I’ve already told you about our day without power.  Then 3 days later was a day/night with two Welsh Water tankers parked outside out hedge. Lucky enough not to be effected by  no water, just the constant noise of these tankers reeving their engines forcing water down the hydrant.

Josh and I still watched firework display from the window, over looking the valley. He likes to open the window to hear the fireworks explode- making more of the atmosphere.  If shutting window pretty smartish due to the fumes from the tankers.

Since Harvey went to Australia ever time we visit Josh, perhaps driving in the car we will mention Harvey to Josh, he always says ‘Oh yes, Harvey is with the Kangaroos’, and we reply  ‘he hasn’t seen any yet’ and so at last after nine months he sent us some photos to show him feeding a very tame kangaroo. Josh was impressed, but said ‘what about the koala bears’! 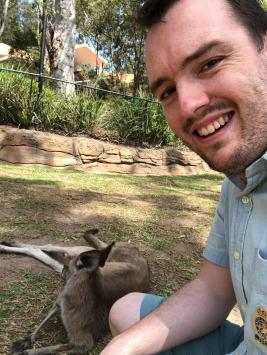 Guess what’s my screensaver on my phone now!